The Rule requires schools and communities, of identified districts, to work together to design solutions and implement educationally justifiable, effective and voluntary strategies that provide meaningful choices of integrated learning environments for students and their families.  If a district or school is identified as racially isolated, the district must work with neighboring districts to create a voluntary desegregation plan.

NWSISD envisions a global community learning and growing together, by providing students, parents and staff educational opportunities that are multicultural, diverse and promote racial integration.

In order to achieve these goals, NWSISD has worked with its member districts to make several programs available to students living in the seven member school districts.

Created in 2001 in response to the State of Minnesota’s Desegregation Rule, NWSISD emerged because Brooklyn Center and Osseo Area school districts were identified as "racially isolated" as defined by the Desegregation Rule. A racially isolated school district is defined by law as "a district where the district-wide enrollment of protected students exceeds the enrollment of protected students of an adjoining district by more than 20 percentage points." ​ 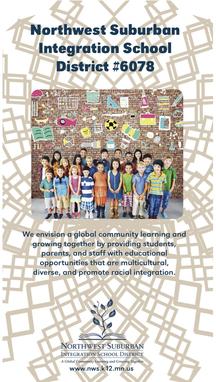